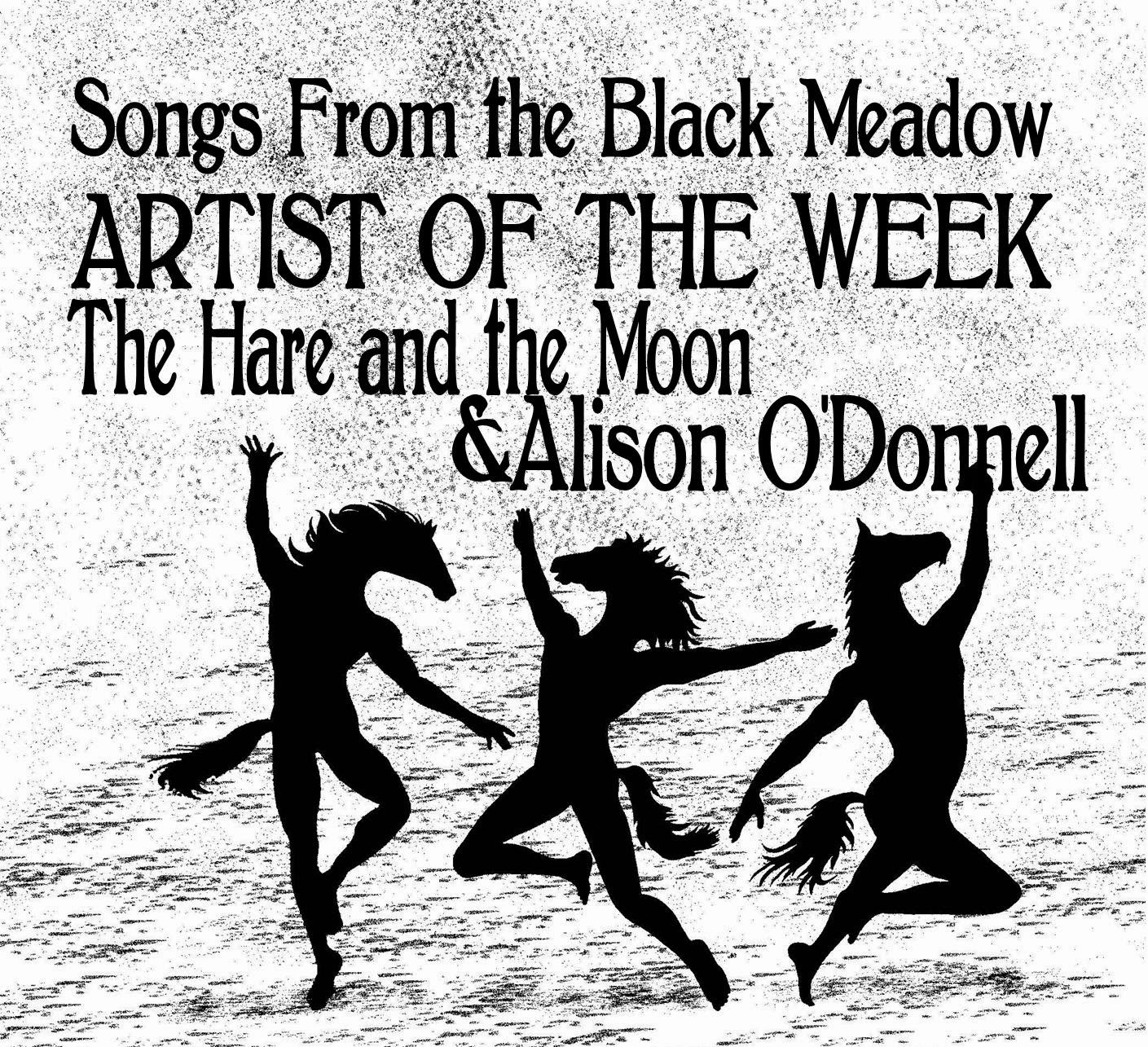 Celebrate the extensive and exciting work of this incredible artist this week.

She has collaborated with Hare and the Moon to create a phenomenal piece of music that opens the album in a soaring epic style. The following biography is taken from Wikipedia and can be read here.

O'Donnell grew up in Dalkey and Killiney in south County Dublin, where she had a daily view of Dalkey Island (which was to provide inspiration for song writing in her teens and early 20s). Ballet and sporting activities were early interests until the age of 11 when music became her abiding passion. Her commitment was sealed when she took Cecilia as her Confirmation name (Saint Cecilia being the Patron saint of musicians). At the age of 11 she co-founded the progressive folk rock band Mellow Candle with school friends Clodagh Simonds and Maria White. They released their first single, Feeling High on SNB Records (Simon Napier-Bell) in 1968.

On leaving school, O'Donnell attended Art College in Dún Laoghaire (now Dún Laoghaire Institute of Art, Design and Technology) and briefly joined Blue Tint, a covers band, where she met her first husband, guitarist Dave Williams, who was studying at Trinity College, Dublin. This was followed by a secretarial course and employment until a full electric line-up of Mellow Candle reformed. The band lived and worked in Ireland and England between 1969 and 1973 managed by Thin Lizzy manager, Ted Carroll. O'Donnell and Williams spent their wedding evening in concert with Thin Lizzy at The National Stadium in Dublin. Bob Geldof, Luke Kelly and members of Clannad were amongst early spectators at Irish concerts, and several members of the group participated in house sessions with pioneering traditional musicians, Dónal Lunny and Andy Irvine. The band released their latterly highly acclaimed, cult album, Swaddling Songs on Decca Records's Deram subsidiary in 1972.

The untimely and unhappy demise of Mellow Candle and the tough economic climate of the Three-Day Week in 1973/74 London sent O'Donnell and Williams to Johannesburg, South Africa. Simonds and Murray ultimately went to New York, and Boylan joined The Gary Moore Band for a time. In the year before their departure they played Belgian bars as a folk duo and formed a short-lived band with legendary guitarist Jimmy Faulkner, who died in 2008. Disenchanted by hard drug use backstage, they abandoned the project. Two years after their arrival in South Africa the couple participated in Palet, an Afrikaans music and poetry programme in 1976 for the fledgling South African Broadcasting Corporation's television service. The show was considered too radical and highbrow, and never aired, resulting in the producer's resignation. They formed traditional group Flibbertigibbet in 1977 with Barrie Glenn and Jo Dudding whom they met at Mangles Folk Club. The band recorded their vinyl album, Whistling Jigs to the Moon in 1978 in South Africa for a slim, niche market, and made several appearances on SATV. The recording was more fully appreciated and reissued in 1996.

After the break-up of Flibbertigibbet in 1979 O'Donnell worked as a session singer for singer-songwriters and advertising agency recordings, toured in the musical I'm Getting My Act Together and Taking It on the Road produced by Des and Dawn Lindberg, and performed in a series of satirical revues in 1980/81 with South African actors and musicians: Tortue Revues I and II in Rockey Street's famed 80s clubs, and Fool Marks and Commit No Nuisance at the Chelsea Hotel Hillbrow with music by David Marks (songwriter, producer and archivist), who had earlier given Flibbertigibbet their first run at The Market Theatre in Johannesburg.[1] In the early to mid-80s O'Donnell appeared briefly with jazz group Theta and an early incarnation of the popular rock group Ella Mental at Sun City. She recorded an album with writer/producer Terry Dempsey's band, Plastik Mak, which included his hit song Daydreamer and performed in after-show cabaret with musician/actress Michelle Maxwell and on the folk club stage with blues/folk guitarist Mike Dickman. She also appeared regularly with singer-songwriters Colin Shamley and Roger Lucey, guesting on their respective albums. During this period she assisted in running the door for Club Le Chaim, which featured musicians opposed to the Apartheid regime. In the year before she departed Johannesburg for London in early 1986, O'Donnell co-wrote the repertoire and performed with contemporary jazz group Earthlings at night. By day she worked for South African Associated Newspapers, which at that time included the The Rand Daily Mail and the The Sunday Times.

Between 1986 and 1996 O'Donnell worked in public sector administration in London. At this time interest in Mellow Candle was gathering pace. The pre-drums demos were released as The Virgin Prophet and the re-mastered Swaddling Songs has been reissued on vinyl and CD regularly since then. In 2006 a Mojo magazine poll Beyond Folk the group was listed in the top 50 genre-bending folk classics of the last forty years. The band features in a number of Top Ten lists in Galactic Ramble (a complete study of 60s and 70s music in the UK). Tracks are regularly licensed out to compilations, amongst them, O'Donnell's Messenger Birds for The Story of British Folk (a double CD collection covering British folk music from the early 60s to modern day contemporaries), the co-written Sheep Season on Early Morning Hush, Notes from the Folk Underground 1969–1976, and Heaven Heath on Legends of Ireland. In 2007 an original vinyl copy of the album sold to a Canadian eBay bidder for $2,650.

In 1997 after leaving an administrative post with the London School of Economics, O'Donnell moved to Brussels, working with jazz and folk musicians, in pantomime, and giving voice coaching lessons and workshops. O'Donnell's own vocal training had included a period at the Leinster School of Music & Drama in Dublin in her teens, in Johannesburg during the mid-1970s for a six-month period with a teacher specialising in syncopation, and a further three months with a former opera singer. Traditional group Éishtlinn was formed by O'Donnell with Flemish guitarist Philip Masure in 1998. The band played in Belgium, France, Luxembourg and the Netherlands, releasing the album, Éist Linn in 2001.

O'Donnell returned to Ireland in 2001 but continued to work with three Flemish women singers in French, Flemish and English in the band Oeda, which came joint second in the nationwide Belgian band competition Nekka-contest 2001–2002. Soetkin Collier, of Oeda, is more frequently associated with the Belgian folk group Urban Trad, who finished second in the Eurovision Song Contest 2003.

O'Donnell's repatriation after 28 years away from the Irish music scene meant that she had to embark on a steep learning curve. She sings and plays bodhrán in sessions, festivals, gigs and charity events in Ireland and abroad, mostly collaborating with other artists. O'Donnell and a male entrant won a medal each for a "Newly Composed Song in English" at the Dublin Fleadh in 2004, they being the only two entrants in the category that year. Aside from her concert repertoire of original psych folk and trad rock songs, she has a wide repertoire of traditional, folk and jazz songs. She is a member of An Góilín (a traditional singers' club) and the Howth Singing Circle.With instrumentalist Isabel Ní Chuireáin, she released the album Mise agus Ise in 2006.

From 2007 there were collaborations and contributions to recordings with Dave Colohan of Agitated Radio Pilot, Canadian psych folk band, Mr. Pine, Colin Harper's collective The Field Mouse Conspiracy and The Guessing Game, the 9th album from the Doom metal band Cathedral. In 2008 O'Donnell featured on a vinyl double A-Side single of Nick Drake's Day is Done and Nico's Frozen Warnings with Graeme Lockett of Head South By Weaving[12] and an EP, The Fabric of Folk, with The Owl Service. They appeared together at the Green Man Festival. O'Donnell and Steven Collins of The Owl Service have collaborated regularly, including on several tracks for her first solo album, Hey Hey Hippy Witch, released in 2010. Other contributors and collaborators on this project are Michael Tyack of the psychedelic folk rock band Circulus, Kevin Scott of Mr. Pine, Head South By Weaving and Gavin Prior and Dave Colohan of United Bible Studies. In 2008 O'Donnell became a member of United Bible Studies, an experimental collective which draws on members from a number of countries. She contributed to their 2009 album The Jonah and a UBS/Jozef Van Wissem vinyl album, Downland, in 2011.

O'Donnell is known for her enthusiastic and varied collaborations. Recent work includes Bajik, a live band playing new and recent O'Donnell material formed in 2010, headlining at their maiden concert in Spain at the Datura Folk Festival, a contribution to the album Towards Abstraction by Big Dwarf, a contemporary electronic psychedelic band and a joint album with Head South By Weaving, The Execution of Frederick Baker, both in 2013.

Email ThisBlogThis!Share to TwitterShare to FacebookShare to Pinterest
Labels: Alison O'Donnell, Artist of the Week, Biography, The Hare and the Moon